CSCS, the Swiss National Supercomputing Centre, takes another important step in the implementation of the Swiss high performance computing and networking (HPCN) initiative, which is coordinated by ETH Board. A Cray XC30 supercomputer has been installed at CSCS and will become available to Swiss researchers in early April.

The next generation supercomputer has a peak performance of 750 Teraflops, which means that it can handle 750 trillion (750'000'000'000'000) mathematical operations in just one second. Following tradition CSCS has named the new supercomputer after a Swiss mountain, "Piz Daint", which is a prominent peak in Grisons that overlooks the Fuorn pass. 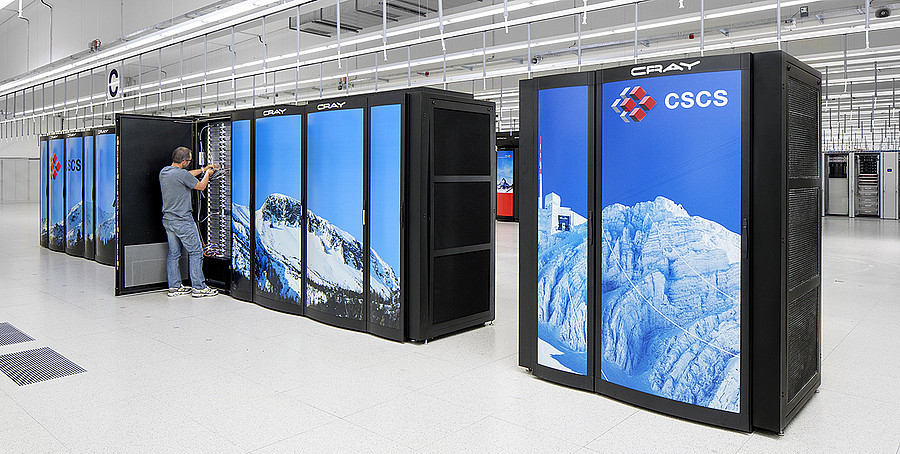 A system engineer working on the supercomputer Piz Daint

Piz Daint is the largest of the new generation of Cray supercomputers installed worldwide. It is based on the latest generation Intel Xeon E5 processors with a total of 36'096 compute elements. The internal communication network has been completely redesigned to enhance scalability of scientific applications. The benefit is that more compute elements can be used in parallel without sacrificing efficiency, thus allowing for larger and more complex scientific problems to be addressed. With Piz Daint, important developments will be made in various fields of research, such as climatology, earth science, materials science, fluid dynamics, astrophysics, and life science.

Although Piz Daint is made up of only 12 cabinets, it almost doubles the computing power provided by the current flagship computer, a 20 cabinet Cray XE6 (Monte Rosa). The cooling system of the machine has been improved compared to Monte Rosa, thus improving energy efficiency.

With the launch of the new supercomputer, CSCS announced together with Cray and NVIDIA a future upgrade of Piz Daint with NVIDIA® Tesla® K20X GPU accelerators. CSCS will be the first customer to receive a Cray XC30 supercomputer with NVIDIA GPUs. These accelerators can increase the overall performance significantly and at much lower energy cost than traditional processors. Once the expansion is completed, the Centre’s Cray XC30 system will be the first petaflop scale supercomputer in Switzerland. The upgraded system is expected to be put into production in 2014.

Thomas Schulthess, Director of CSCS, comments on the installation of the new supercomputer, "A great team effort at the beginning of 2013 allowed us to get Piz Daint running in just 3 months, and make one of the most advanced supercomputers in the world available to Swiss researchers. I am very happy about this remarkable achievement, which has followed a very intense year of 2012 that saw the completion and the move into our new computer center in Lugano. The new system will enable researchers to solve ever more complex problems, be it in the search for new materials, in the prediction of climate changes, or in other disciplines. With the planned GPU acceleration, the application performance and the energy efficiency of our simulations will improve significantly. We are very excited about the collaborative development with Cray and NVIDIA of a truly general purpose hybrid multi-core system with Cray.”