For the first time, the scientists simulated the long-term evolution of the Milky Way Galaxy with over 50 billion particles, using their N-body gravitational tree-code called Bonsai. They simulated the Milky Way for a period of 6 billion years, during which the bar structure and spiral arms of the galaxy became fully formed. “This improves upon previous simulations by using 1000 times more particles, and provides a wealth of new data that can be directly compared with observations”, says Simon Portegies Zwart from Leiden University, head of the research team. The researchers report the scalability of the code on "Piz Daint" and on Titan, the flagship supercomputer at Oak Ridge National Laboratory in the United States. “We used 5,200 GPU nodes of "Piz Daint" at a parallel efficiency of 96%, reaching 7.8 Petaflops performance”, says Portegies Zwart. The highest performance was achieved with a 242 billion-particle Milky Way model using 18,600 GPUs on Titan, reaching sustained application performances of 24.77 Petaflops in single precision.

Titan, a Cray XK7, is currently the second fastest supercomputer in the world, while "Piz Daint", a Cray XC30, is ranked number 6 on the top500 list.

The Gordon Bell Prize winners will be communicated during the SC14 conference that will take place from 16. until 21. November 2014 in New Orleans, Louisiana. 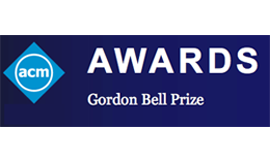