ETH Zurich professor Eduard Stiefel pioneered the use and development of computers in Switzerland, bringing Conrad Zuse’s Z4 – the world’s first universal computer – to Zurich in 1950. Although the Z4 is hardly comparable with today’s electronic computers, it did help solve real technical and scientific computational problems – such as the static calculation of the Grand Dixence Dam in Valais. Mathematical-based research projects conducted on the Z4 led to fundamental discoveries, new computational methods and the beginnings of a compiler, which translates software written in a human-readable programming language into code that is executable on a computer.

Supercomputers as powerful as an iPad

After six years of discussions regarding its location, the Swiss National Supercomputing Centre (CSCS) was opened in Manno (Ticino) in 1991. The centre is run by ETH Zurich and its first supercomputer was an NEC SX-3 with two processors. With a processing power of 5.5 gigaflops, it could carry out 5.5 billion computer operations per second, which is about the same power as an iPad today. The supercomputer supported Swiss research primarily in the fields of climate, astronomy, and engineering – fluid dynamics applications, for example.

Every three to four years, supercomputers are considered obsolete and have to be replaced or revived with new, more powerful technology. And CSCS was no exception. In the year 2002, under the then director, physicist Michele Parrinello, CSCS purchased a massively parallel system for the first time. The IBM SP4 with 256 processors was able to conduct 1.3 trillion computer operations per second. The supercomputer was almost ten times more powerful than its predecessor (NEC SX-5) and, moreover, was useful for solving problems in new application domains such as molecular dynamics. When the IBM computer was eventually replaced with a Cray XT3, which was even more general purpose, in 2005, application fields became still more diverse. In the course of CSCS’s history, along with theory and experimentation, high-performance computing (HPC) has therefore become a central research instrument for virtually every scientific discipline in Switzerland. Today, HPC enables researchers to gain insight into highly complex problems in physics, chemistry, environmental science, climate science, energy research, health and economics.

In December 2009, the Swiss government approved the National Strategic Plan for High-Performance Computing and Networking (HPCN Strategy) compiled by the ETH Board on behalf of the State Secretariat for Education, Research and Innovation (SERI). The Confederation, the ETH Domain and universities therefore paved the way for an internationally competitive Swiss supercomputer network. With the provision of CHF 172.5 million, CSCS received an ultramodern new building in Lugano to house and operate its supercomputing infrastructure. The building opened its doors in 2012 and, with Piz Daint, a Cray XC30 – also funded via the strategy – received Switzerland’s first petaflop computer.

Alongside construction of the new infrastructure, initiatives were launched that focussed on optimizing software and hardware to improve the energy efficiency of supercomputing. The Platform for High Performance and High Productivity Computing (HP2C) was launched in 2009, with the aid of funding from the HPCN Strategy, and was followed by the Platform for Advanced Scientific Computing (PASC) initiative in 2012. These initiatives were largely instigated by the current director of CSCS, and ETH Zurich professor, Thomas Schulthess, who has been running the computer centre since October 2008. Besides improved software in various application fields, a physical manifestation of these efforts is the hybrid supercomputing system Piz Daint, which uses graphics and conventional processors for its calculations. Piz Daint enables researchers to simulate highly complex problems even more realistically and efficiently than before, and structure and analyse large quantities of data – like those produced by the large hadron collider (LHC) at CERN, for instance.

Most powerful supercomputer in Europe

One goal of the HPCN Strategy was to support top-flight research in Switzerland and thus safeguard the country’s competitive edge. In the meantime, Switzerland currently has the most powerful supercomputer in Europe, which is used by around 600 researchers from this country and aboard. Moreover, the successful initiatives HP2C and PASC led to a close collaboration with Università della Svizzera italiana (USI), especially in the field of Data Science and gave rise to the annual PASC Conference. First held in 2014, it has quickly grown in scale and international reputation.

In its twenty-five years of existence, CSCS has experienced a thoroughly eventful history under nine directors. But today – not least thanks to the HPCN Strategy – it is a scientific computer centre with an international reputation and collaborations that offers its users a comprehensive service in the field of hardware and software. At the same time, CSCS operates the “Weather Computer” as a service facility for MeteoSwiss, which began using CSCS for its weather forecasts in 2001. CSCS has also operated a cluster for the Swiss Institute of Particle Physics (CHIPP) since 2007 and the Blue Brain project’s supercomputer since 2013. 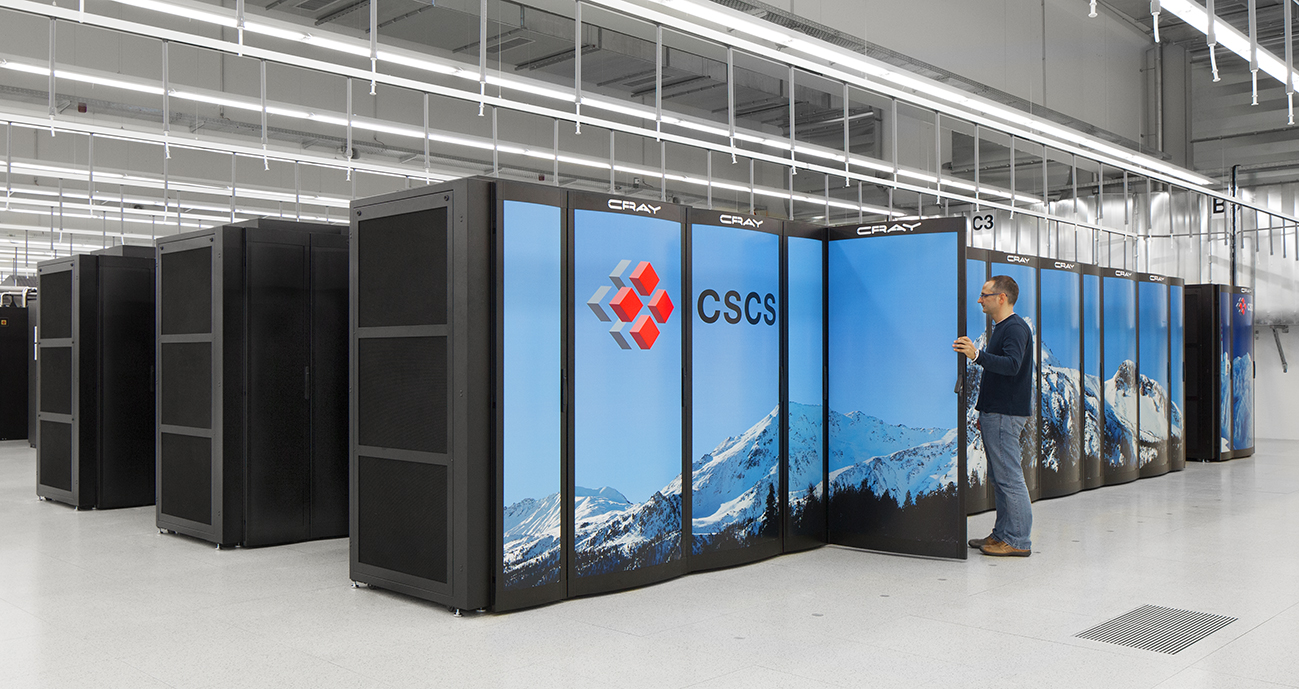